The model assumes a symmetric machine with a sinusoidal input voltage as well as the common assumptions for the dq-transformation (neglecting the zero-component). Small letter values indicate time dependency without explicitly stating it. The PMSM model is based on its differential equation using the flux-linkage as state values in the dq-plane [2, p. 1092]:

Rearranging to calculate the current from the flux-linkage:

With the rotational speed linked to the electrical rotation speed in dq-coordinates by the number of pole pairs [2, p. 1092]:

The PMSM generates an inner torque \(T_I\) according to:

This can be rearranged to the following equation [2, p. 1092]. Note that the flux-based equation above is implemented in the model.

The mechanical system is modeled by the following equations. The inertia of the complete system is summed into the inertia \(J_{sum}\), i.e., rigid coupling of the system is assumed.

With the constant coulomb friction \(M_c\), and the friction coefficient \(\sigma\). 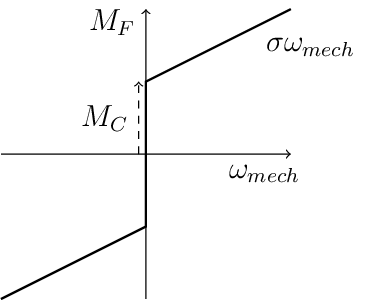 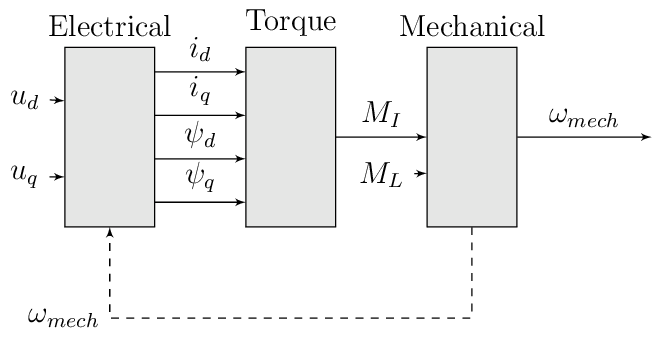 In addition to the time-dependent values, the PMSM model parameters are configured by AXI.

The differential equations of the electrical and mechanical system are discretized using the explicit Euler method [ 3, p. 3 ]. Using this method is justified by the small integration step of the implementation (\(t_s=0.5~\mu s\)) and is a commonly used approach 3, p. 3 ]. The new value at time \(k+1\) of the state variable is calcualted for every time step based on the old values (\(k\)):

For the mechanical system:

Comparison between reference and IP-Core

Pole pairs of the PMSM

Inertia of the PMSM

Determine if mechanical system is simulated or speed is an input

Struct to return and read the outputs of the PMSM Model.

Current in d-axis in A

Current in q-Axis in A

Inner torque of PMSM in Nm

Rotational speed of PMSM in 1/s

Struct to be used to pass inputs to the PMSM Model.

Voltage in d-axis in V

Voltage in q-axis in V

Rotational speed of PMSM in 1/s

Initialize an instance of the driver.

uz_pmsmModel_t* Pointer to an initialized instance of the driver

Set inputs of the model and write them to the PMSM model IP-Core.

Resets the PMSM model by writing zero to all inputs and sets integrators to zero.

Takes the values of the AXI shadow register and pass them to the actual input.

Takes the values of the shadow register and pass them to the actual AXI register.